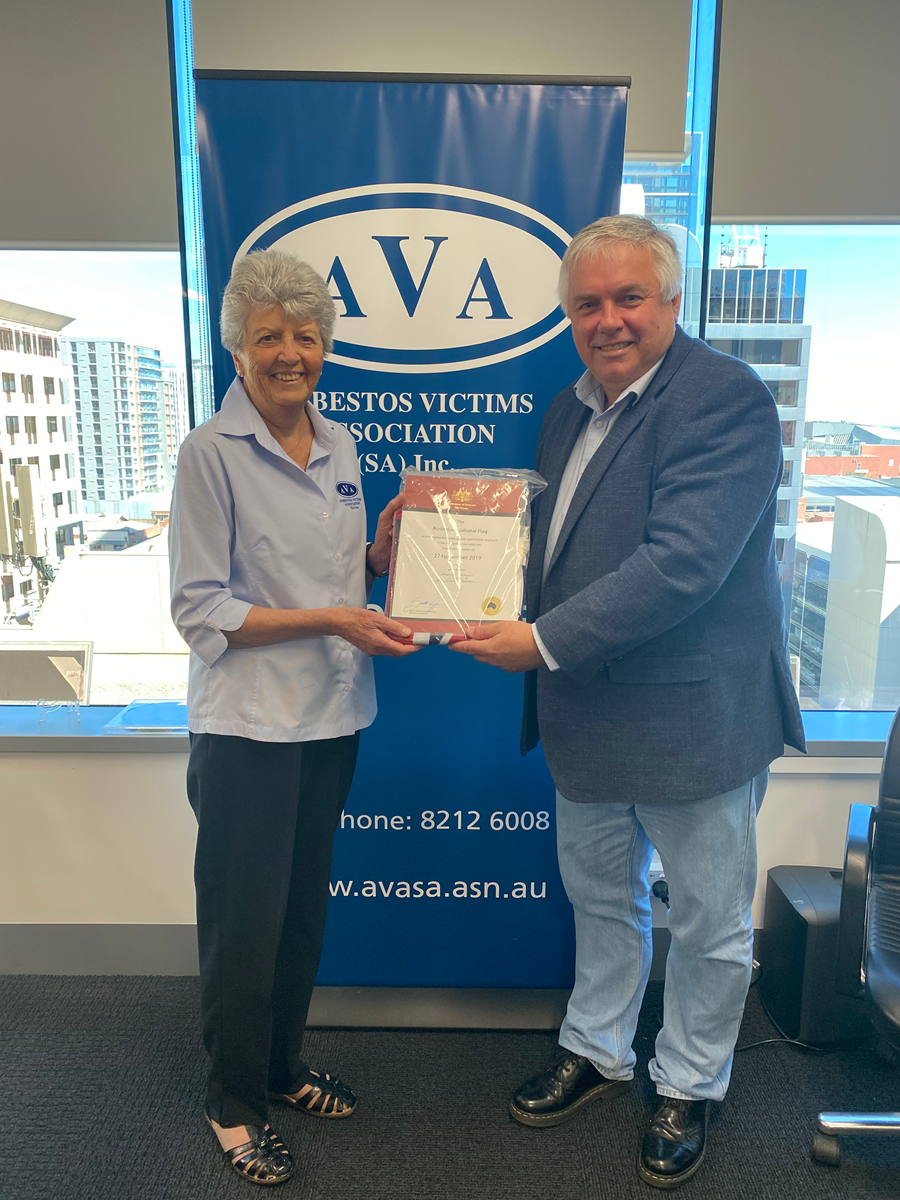 Rex with Catherine Wegener at the Asbestos Victims Association.

Welcome to the April 2021 newsletter. This month I've been out around the country taking part in Senate committees and working away on Freedom of Information requests to help keep this Government honest and, of course, meeting with South Australians.

With the many COVID delays and restrictions over the last 12 months, it took some time but I finally got to catch up with members of the Asbestos Victims Association and present Catherine Wegener with the Australian flag that was hanging in the Senate the week I read a speech about her husband, Rex, which you can watch here.

If you’re in the regions or have family and friends in a rural community, you would already know how hard it can be for them to get access to decent medical care.

I’ve been exploring this at Senate Estimates, asking for details on how many doctors short we are in South Australia. Disturbingly the Government can’t even answer this question.

You can’t fix a problem if you don’t know how big the problem is. I know from speaking with locals and medical professionals in Kangaroo Island and SA’s Eyre Peninsula that the problem is widespread.

People in regional areas are entitled to have quick and easy access to a doctor and I’ll keep reminding the Government of this until we see proper action taken to address this problem.

MURRAY-DARLING SENATE HEARINGS BACK ON THE ROAD

This month we visited Sydney, Moree and Goondiwindi where we heard from environmental and river advocacy groups, the Productivity Commission, community and Indigenous representatives and irrigators.

We’ll be visiting Victoria and South Australia in the coming months and you can follow our work here. 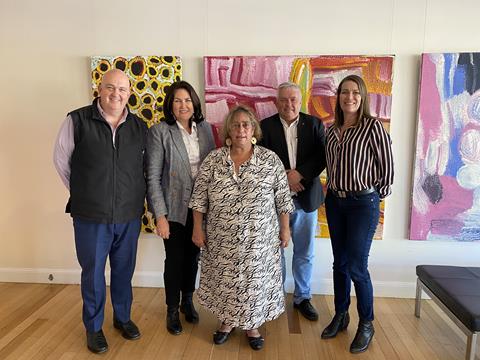 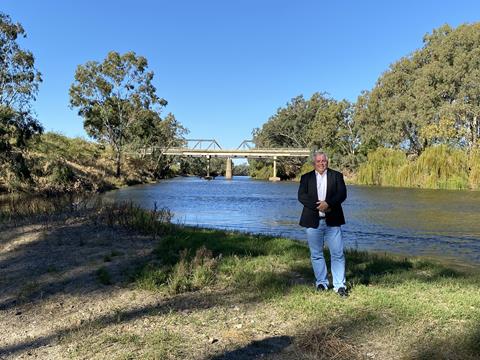 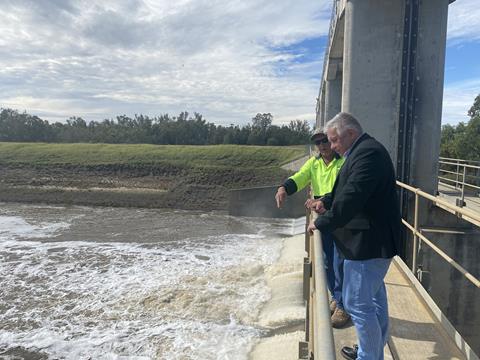 Rex and the Committee in Moree and Goondiwindi.

The Senate hearing into my bill to ban the importation of goods produced in Xinjiang using Uyghur slave labour took place this week, and I’m pleased to say representatives of the Uyghur community were able to appear before the Committee and express their support for the bill.

Unfortunately, Government officials from DFAT and Border Force dodged my questions about how they are communicating with Australian companies importing goods from Xinjiang or whether they’ve examined the US Department of Commerce’s blacklist of nearly 50 companies over alleged Xinjiang violations. It’s very disappointing that we have the Government stating it is “deeply concerned” about reports of what is happening in Xinjiang but not concerned enough to do anything about it.

I’ll keep fighting for the Parliament to stand beside me in supporting my bill, whilst also calling on the Parliament to join with the US, Canada and the Netherlands in declaring China’s actions against the Uyghurs as a genocide.

Many of you will know I’m a keen supporter and user of Freedom of Information requests. This is because it's one way anyone can participate in public policy debates, the use of Government expenditure or look at what Government may be planning.

Unfortunately, over the last few years, the Government has pulled the shutters down on openness and transparency. Government officials who have sensed this goal are making reckless FOI decisions that deny access to information, often using blanket redactions.

Improper decision making has seen an increase in applications to the Information Commissioner whilst the Government has deliberately starved her office of funds.

I’ve written to the Information Commissioner warning her of my intention to take her to the Federal Court to force her to make decisions in a reasonable time frame but I’m also hoping this is a warning to Government that will force them to properly resource her office and the important work is carries out.

A well-informed citizenry is the lifeblood of democracy. In all arenas of Government timely information is the currency of power. And the power should ultimately rest with the people.

Did you know that under our current laws a sitting justice’s taxpayer funded pension of more than $300,000 can be stripped from them for engaging in sexual harassment, but they can keep it if that same misconduct only comes to light after their retirement?

I’ve moved a Bill to shut this loophole which Labor appears to support yet the Liberals appear to oppose.

It boggles my mind that someone could sit at home in retirement receiving over $300,000 of taxpayers money each year in circumstances where they engaged in sexual harassment whilst they were in office. It’s downright disgraceful and offensive.

I’ll keep you updated on how this plays out, hopefully the Liberals see sense and support this reasonable measure.

P.S. I fully support the same measure being applied to any politicians who qualified for the overly generous parliamentary pension scheme that was in place pre 9 October 2004.

Read more about my proposal here

More than half a million children are not getting the proper amount of child support and yet our Government is doing nothing to remedy it.

I've been gathering the data, and can reveal that more than 700,000 parents in total are behind with their tax returns including 16,000 parents that have not lodged a tax return for more than 10 years, 70,000 haven’t done so for more than 5 years. What this means is that the wrong formula is used by the Child Support Agency to calculate child support, resulting in the wrong child support amounts being used.

I've demanded the Social Services Minister talk to the Tax Office to follow up people who don’t lodge their tax returns on time - after all it’s against the law. I've also suggested the Child Support Agency increase payment requirements by a punitive amount after warning a non-compliant parent.

What we have here are Government agencies and Ministers not doing their jobs properly and failing Australian children. It's totally unacceptable. I'll be following this up again at the May/June Senate Estimates.

I hate to be the bearer of bad news, but it looks like the taxpayer is heading towards a billion dollar screw up that could have been avoided if the Government actually listened to the warnings.

You the taxpayer have already spent $86 million dollars keeping the Northern Endeavour, a floating oil production storage and offtake vessel, in ‘light house’ mode in the Timor Sea, with an actual $231M contracted moving forward. The decommissioning of this vessel is likely to end up costing you more than a billion dollars.

I warned the Government in 2019 that they were steering taxpayers into danger by driving a commercial Australian oil and gas producer into administration. At the time I suggested the Government work with the Northern Endeavour’s owner to find a workable solution, but they didn't listen.

To make matters worse, one of the Northern Endeavour owner’s creditors is now taking legal action against the Government in the NSW Supreme Court.

It seems there’s no accountability with the Government and you the taxpayer always pay the price.