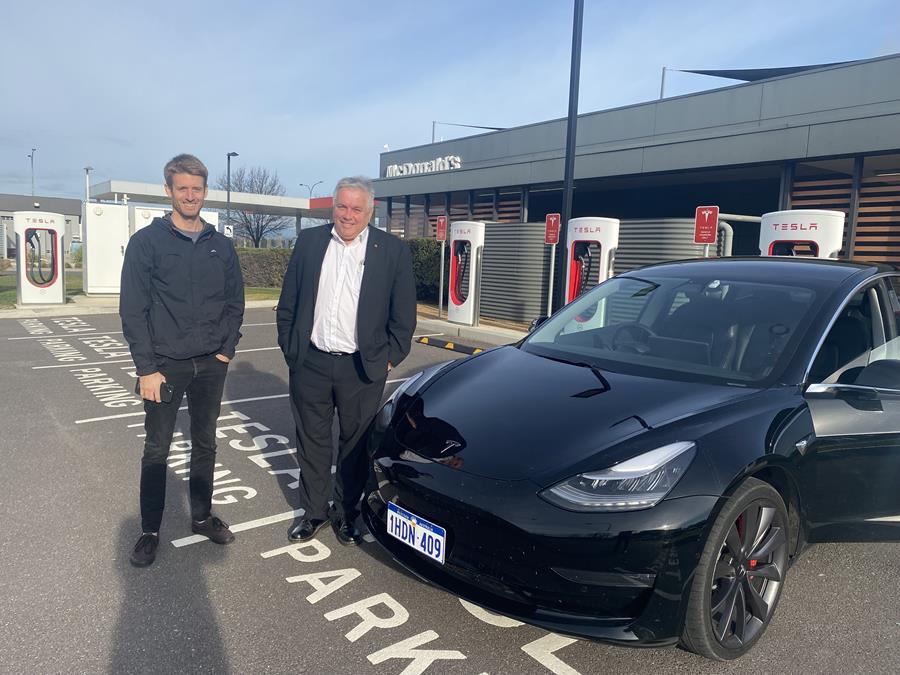 Rex with Daniel for the Coal Miners Driving Teslas series

Welcome to the June newsletter. Can you believe we're already at the halfway point of the year? It's been a busy few weeks since our last newsletter with Senate Budget Estimates occurring and some late Senate sittings, and so I've wrapped up some of the most important bits below.

I'd also like to thank everyone who came out to the first Rex Patrick Team catch up. It was lovely to meet some of you for the first time and put names to faces. Stay tuned for future coffees and catch-ups, COVID restrictions permitting!

As always, if you need assistance with a Government matter or have a concern you’d like to raise with me, don’t hesitate to reach out to my office at [email protected] or 08 8232 1144.

For those of you interested in Electric Vehicles, I was recently able to take part in the Coal Miners Driving Teslas series which you can watch here.

DO WE NEED A COVID-19 ROYAL COMMISSION? I SAY YES

COVID-19 has seen Australia grapple with some of the biggest public policy challenges of its time. More than $310 billion of your taxpayer dollars have been spent and there have been considerable restrictions on liberties as Governments have tried to deal with the pandemic.

Some things have gone right, lots of things have gone wrong - totally avoidable deaths in aged care, JobKeeper payments going from the taxpayers to executive bonuses and shareholder dividends, quarantine failures, a vaccination roll-out shambles and government transparency and accountability thrown out the window. Some of the failures have resulted in family tragedies, considerable national economic costs, businesses going under, people losing their jobs and the community being left completely vulnerable from vaccine shortages.

This massive event and the Government’s response require a Royal Commission inquiry. Those who do not study and remember the past are doomed to repeat it. We need a politically impartial examination that can cut through all of the secrecy and spin. We need to see Scott Morrison in the witness box, compelled to publicly answer hard questions.

NATIONALS MUST BE STRIPPED OF THE WATER PORTFOLIO

You no doubt heard about the full-scale attack on the Murray-Darling and South Australia launched by The Nationals in the last sitting week.

The Nationals, led by returned ‘leader’ Barnaby Joyce, tried to kill off the 450GL of environment water owed to SA by trying to amend the Water Act and Basin Plan. We know from the SA Royal Commission that there is not enough irrigation water being returned to the river. The 3200GL in the current plan falls short of what is needed, let alone reducing that by a further 450GL.

Despite the disgraceful and disruptive antics from Barnaby Joyce’s party, Scott Morrison allowed The Nationals to retain the Water portfolio. Unbelievable! Imagine that; implementation of Murray-Darling Basin Plan remains in the hands of a Party that not only doesn’t believe in the plan, they want to destroy it!

South Australians must be on full alert. Prime Minister Scott Morrison’s hold on government is dependent on the Nationals. I will always fight for SA in the Senate to protect the Murray.

Check out the joint press conference held by myself and South Australian MPs here https://youtu.be/UfRh8KMPq0w

ACTION ON SLAVE LABOUR MUST NOT BE DELAYED

In June the Senate Foreign Affairs, Defence and Trade Committee’s report on my Bill Customs Amendment (Banning Goods Produced By Uyghur Forced Labour) Bill 2020 was tabled and offered up some strong bipartisan recommendations, including expanding my bill to crack down on goods made from forced labour anywhere in the world.

I’ve since introduced another bill to implement the Committee’s recommendation to ban goods made from any slave labour, not just Uyghurs in Xinjiang. The new Bill will ban the importation of goods that are produced in whole or part by forced labour in any geographic location around the world.

Estimates of the number of slaves across the world range from around 38 million to 46 million and the use of forced labour within global production chains has emerged as a major humanitarian concern.

The issue of modern slavery has been highlighted to everyday Australians by the human rights abuse of hundreds of thousands of Uyghur people in Xinjiang Province in China. The massive and systematic oppression of the Uyghur people by the Chinese Government is undeniable.

This is a matter that cannot be delayed. I’ll ask the Senate to vote for my Bill on 23 August. Given the bipartisan response from the Senate Committee to my previous Bill, there is no reason it shouldn’t pass through both Houses of Parliament.

I’m disappointed to let you know the Senate passed the “Your Future, Your Super” Bill without some important changes I put forward.

I moved a number of amendments to the “Your Future, Your Super” Bill that removed some harmful elements and made improvements to the Bill including; amendments to make sure workers don’t get their super ‘stapled’ to an inappropriate or underperforming fund, making sure performance testing applied to both industry super funds and retail funds and to ensure the Treasurer can’t intervene to tell funds how, or how not, to invest your money.

My amendments were supported by the ACTU and Australian Industry Group - workers and employers together. While they were supported by Labor and the Greens, sadly, the Government, Pauline Hanson, Stirling Griff of Centre Alliance and Jacqui Lambie did not support them. This means the improvements I proposed were ultimately rejected.

You may recall my warnings to Government about the cost of the ‘Northern Endeavour’ Floating, Production, Storage and Offtake (FPSO) vessel. It was as far back as 24 August 2019 that I warned the head of NOPSEMA that they were driving the vessel owner into liquidation and that the public would end up footing the bill for a stranded asset. He responded “We won't be taking anything over. That's not our role.”

Yet that’s exactly what happened a month or so later. For almost two years the Government has been operating Northern Endeavour in ‘lighthouse’ mode - costing us more than $200M. The Government is now seeking to impose a levy on the oil and gas industry to cover the costs.

So here we have a story of a piece of pipe falling onto the deck of a vessel and turning into a billion-dollar problem for the taxpayer. This story is just another example of how the Australian Government has totally mismanaged our oil and gas resources. Countries like Norway, UAE and Qatar have grown wealthy off the back of their resources. We, on the other hand, have been pillaged by big international companies who pay no corporate tax and very little in the way of royalties.

20 BILLION OF YOUR MONEY AWARDED IN SECRECY BY SECRET GROUPS

Many of us are fully supportive of taxpayer dollars going towards medical research to support the future of Australians' health, but there’s a serious problem with how your money is being awarded.

The Medical Research Future Fund (MRFF) is a $20 billion long-term investment where grants are awarded to organisations in a process where no-one knows who the applicants are, the list of people who decide who is awarded the grants are secret, and the assessment as to the winner’s merits is also secret.

It’s a corruption incubator bought to my attention by some in the medical industry who think that corruption is taking place.

I’m advised that the Government wants to keep secret the names of people who review the grant submissions which they claim ensures they get frank and fearless advice. If you’ll only be frank in secret, I don’t want your advice. And how fearless is advice if you’re only prepared to share it with a few?

The Government says things must be secret to protect commercial interests. I say if you’re a commercial entity and you’re about to be given taxpayers’ money, it’s not unreasonable for the public to be able to see why your organisation is worthy of the gift.

GRENFELL TOWER 2.0 A POSSIBILITY IN AUSTRALIA

The 2014 Lacrosse Tower fire in Docklands, Melbourne and the 2017 Grenfell Tower fire in the UK were fires that spread rapidly because flammable cladding had been used in construction of the buildings.

In March this year I formally requested the Australian Building Codes Board audit the use of certain materials that were the subject of concerning discussions in the Grenfell Tower inquiry. The ABCB did so using the Joint Accreditation System of Australia and New Zealand (JAS-ANZ) database of formal certificates of building product conformities and gave the “all clear”. The problem is the JAS-ANZ database is totally ineffective. It doesn’t have the necessary information in it.

After taking officials to task at Senate Estimates, the Department is now having a very close look at the situation. I’ll keep you posted on how this plays out. We need real change so that Australians can sleep well at night.

ADELAIDE WHISTLEBLOWER’S PROSECUTION IS NOT IN THE PUBLIC INTEREST

The prosecution of ATO whistleblower, Richard Boyle, is a most shameful chapter of the ATO. Richard observed an abuse of power within the Tax Office, blew the whistle, only for the Tax Office to botch the investigation into his claim. He then blew the whistle again, this time with the Inspector General of Taxation (IGT). The IGT couldn’t do anything so he then went to the media - for which he is now being prosecuted.

After the media coverage the IGT launched a formal investigation into the Tax Office and found that it was abusing its power.

Laws have now been changed to stop that happening again. Richard has been absolutely vindicated but is still facing the risk of a long prison sentence.

I took the Commonwealth Director of Public Prosecution (CDPP) – the Government agency in charge of the prosecution – to task about whether they considered the broader public interest in prosecuting Richard because surely no-one will ever blow the whistle again after seeing what has happened to him. Disgustingly, the CDPP informed me this wasn’t even considered.

The Attorney-General has now told the Senate she will consider all the circumstances.

The full discussion at Senate Estimates can be found here: https://youtu.be/th8c8KCAeL8

And now for some good news! I’m pleased to inform you that SA community TV station, Channel 44, has been given a three-year lifeline after the Senate supported my amendments to a recent Government Bill.

Channel 44 has been in limbo since 2014 when then Communications Minister, Malcom Turnbull, announced that all Australian community television stations would have to move online. Since that time Channel 44 has been granted a series of last minute one-year licences.

My predecessor, Nick Xenophon, did a lot of fighting for them, and so did Rebekha Sharkie this time around. It’s no wonder; Channel 44 is a great community service that also serves as a training ground for people interested in working in TV.

My amendment sought to ensure that the station has three years to transition its audience to the internet.

Without this lifeline we would have lost Channel 44 last week. I’m glad to have helped an important community service.