Welcome to the September newsletter. It's been a big month for all things submarines. I've broken down in this newsletter what these decisions mean for SA, industry and our national security.

Elsewhere, I've been looking into all things water from the Murray-Darling, a desalination plant for the Eyre Peninsula and fighting the ongoing battle for Government accountability and transparency.

I hope you've got a nice long weekend planned. Enjoy the newsletter.

Amidst all the flurry of the cancelling of the French Future Submarine contract and the plan to go nuclear, you may have missed that Collins Class full cycle docking (FCD) sustainment work is staying in Adelaide.

This is fantastic news for the 700 workers at ASC, the more than 600 SA businesses that contribute to the program, the $400 million annual economic activity that comes to the state, and of course, our national security.

I've been fighting the very real risk that this work was on the move to WA for political purposes since I became a Senator in 2017. With the complete botching of our Future Submarine Program, there is absolutely no question that leaving this work in Adelaide was the best choice, and indeed should have been the only choice. With any new submarines now decades away, it's crucial the Collins Class submarines are maintained, and available as a strong deterrent force.

Thank you to everyone who has supported me in this fight to save SA jobs and protect our national security. 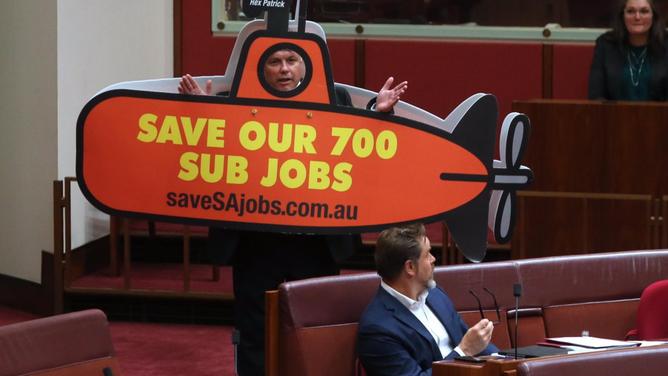 GOVERNMENT ALL AT SEA ON FUTURE SUBMARINES

From the outset, I want to say that the decision to walk away from the French Future Submarine Project was a good one. The budget had gone from $50B to $90B, it was running late, Australian Industry involvement was not meeting promises and there were serious questions about the submarines delivering on national security requirements. I had been calling on the Government to cancel this program for some time.

The Liberal Government started the Future Submarine project and ended it, with no-one else in between. 5 years lost and $2.4 billion gone. Costs will rise even further due to the reckless way they broke the contract. The termination was handled recklessly. Instead of terminating the contract for non-performance, because the French clearly weren't meeting their commitments, they terminated the project for convenience meaning you the taxpayer will now have to pay close to $100 million in break fees. They also torched our relationship with the French Government and went with termination for convenience, putting trade relations at risk. A diplomacy failure for the ages.

The shift to nuclear submarines must also be examined carefully. This is a very big strategic decision with long term national security, geopolitical, and economic consequences that must be the subject to rigorous and wide-ranging scrutiny. I’m pushing for a Senate Committee to open an immediate inquiry with an initial report to be delivered prior to the federal election. Labor seem to support the idea so it should go ahead.

We can’t jump from the frying pan and into the fire and we definitely can't afford another procurement disaster the likes of which we’ve seen thus far.

MARSHALL MUST STEP UP ON DESAL PLANT MESS

But Boston Bay remains the choice of the State Government because Premier Marshall doesn’t want to spend the necessary money on Port Lincoln and the Eyre Peninsula.

In a report that was released only after I made a Freedom of Information request to SA Water, pumping of water from the Uley South Basin must be reduced from 5 GL per year to 3.8 GL by 2024. A desalination plant must have been constructed by then, and with a construction time of three years, SA Water should have started yesterday.

I’m assisting local industries by seeking further information on SA Water’s analysis on other potential sites using FOI - information that should already be in the public domain.

SA can’t be a third world State. Premier Marshall needs to step up and invest properly in public infrastructure. Water for the residents and businesses of Port Lincoln must come before a basketball stadium for the City of Adelaide.

The Senate Select Committee on the Multi-Jurisdictional Management and Execution of the Murray Darling Basin Plan I called for has just handed down its report.

The report is useful in describing the how’s and why’s of the jurisdictional complexity of the Murray Darling. Management of the Murray-Darling is complex and dysfunctional. It involves the parliaments of Queensland, NSW, ACT, Victoria, SA and the Commonwealth. The former interim Inspector General of the Murray-Darling Basin accurately summarised the situation as 'a nightmare'.

The current trajectory of the Murray-Darling is one of environmental decline, no doubt accelerated by climate change. It is at serious risk of becoming an over-exploited wasteland, Australia's own Aral Sea.

The Committee, in a pervasive environment of political timidity, has produced a policy mouse, not the lion’s roar required to make Governments and vested interests sit up and take notice. The only way this national water asset can be sensibly managed in the national interest is if it is done by the national Parliament.

That was South Australia’s view in the 1890’s when our Federation was being established, and it’s my strong view now. 130 years of political deadlock and environmental decline can’t be allowed to continue.

You can read the Committee report here.

MONEY GIVEN TO POLITICIANS MUST BE DISCLOSED

Another month, another scandal from the Morrison Government. Christian Porter thinks having a blind trust pay part of his huge legal bills is fine and that he's complied with Parliament's disclosure rules. But this is not ok. Transparency, standards and accountability are non-existent under Prime Minister Morrison.

Porter may have resigned from the Ministry, but this does nothing to discharge his duty as an MP to place on the public record interests which may conflict, or may be seen to conflict, with his public duty as an MP. This saga is just another reason why we need a Federal ICAC.

After losing to me in the Administrative Appeals Tribunal, where Justice White found that National Cabinet is NOT a Cabinet, Scott Morrison introduced new legislation that would overturn this ruling. Basically - he doesn't like the law, so he wants to change it so he can stifle public scrutiny of ‘National Cabinet’ decision-making as well as many other dealings of Federal, State and Territory governments.

This month a Senate inquiry looked into this proposed law and there was damning evidence from every witness - except the Prime Minister's own Department.

It seems he just won’t accept long-established conventions of Cabinet responsibility and democratic accountability. Labor, the Greens and some of the crossbench are against the Bill. Even one of his own party members has distanced himself from this secrecy obsession, pledging to vote against the PM's Bill.

This is shaping up as a big win for those of us trying to keep the bastards honest.

SAVE THE ST KILDA MANGROVES

This month I was able to get out to the St Kilda Mangroves to chat with an expert, Peri Coleman, about the environmental disaster that has taken place there.

I got to see first-hand the destruction of this once beautiful area and key habitat after water from an adjacent salt pond leaked into the mangroves. Coastal Saltmarsh is listed as a threatened ecological community under national classification system and so it’s particularly disturbing to see what has happened to a delicate and unique area, especially when it could have been avoided.

The visit follows on from the State Government refusing to respond to request for information under FOI into the situation. The refusal is with the Ombudsman who has indicated that the bulk of the documents I requested will be released to me.

The problems affecting the mangroves fit under the Federal EPBC Act and I’ll be taking this matter up in the Senate. South Australia’s unique marine ecosystems should never be taken for granted and every effort must be made to ensure their preservation. 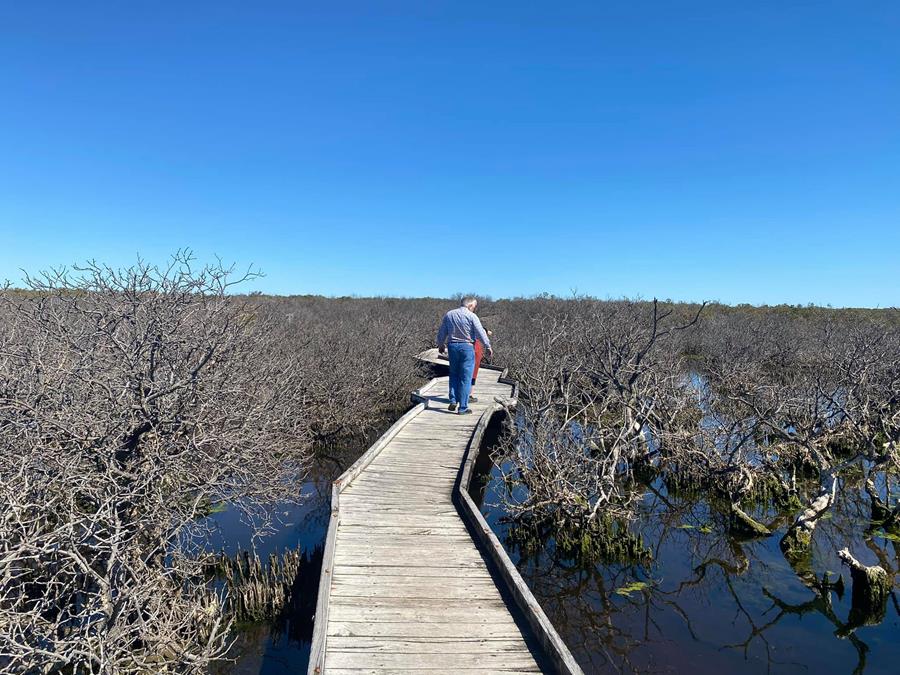 Rex at the St Kilda Mangroves.